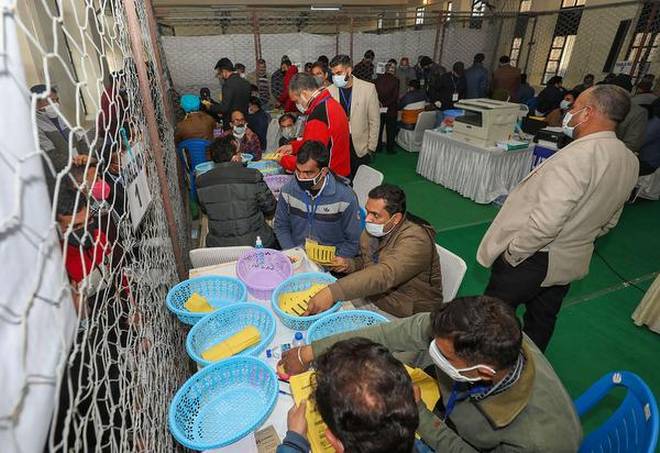 The People’s Alliance for Gupkar Declaration (PAGD) swept the maiden District Development Council (DDC) polls by winning 110 seats, while the BJP emerged as the single largest party by getting 74 seats after securing the largest vote share in Jammu and Kashmir, officials said on December 23.

The results of four constituencies — one each in Bandipora and Kupwara districts of north Kashmir and Poonch and Rajouri districts in Jammu region — are still awaited.

The counting of votes for the 280 DDC constituencies — 14 each in 20 districts — started on December 22 morning after the peaceful culmination of the eight-phase election from November 28 to December 19. This was the first democratic exercise in Jammu and Kashmir post abrogation of Article 370 and bifurcation of the erstwhile State into two Union Territories last year.

Out of the 276 seats for which results have been declared by the J&K Election Commission so far, besides PAGD and BJP, Independent candidates have won 49, Congress 26, Apni Party 12, PDF and National Panthers Party two each and BSP one.

Two Pakistan-occupied Kashmir nationals (PoK), who are married to former militants, are among the contestants from Dragmulla constituency in Kupwara and Hajin-A in Bandipora and the State Election Commissioner has directed the returning officers concerned to defer the counting of votes in the two constituencies till further orders, the officials said.

In Darhal constituency of Rajouri district, BJP’s Mohammad Iqbal Malik is leading over National Conference’s Parvez Rashid by more than 1,000 votes when the counting was in progress.

So far, the PAGD had won six seats, the Congress three and the BJP two while one seat each had gone to the Apni Party and an Independent candidate in the district.

The final result of Balakote constituency in Poonch, where independent candidate Massarat Jabin is leading over her PDP rival Afshan Aftab by a margin of 787 votes, is also awaited. The Congress had won four seats, two seats went to the National Conference, while seven independents have registered their victory from the district so far.

Among the PAGD constituents, the National Conference won the highest number of 67 seats, followed by PDP (27), People’s Conference (eight), CPI(M) five and J&K Peoples Movement (three), getting a total share of over 3.94 lakh votes together.

The BJP, on the other hand, won 74 seats, including three in Kashmir after getting a total of 4.87 lakh votes. However, it only managed to get a clear majority in six districts — Jammu, Kathua, Udhampur, Samba, Doda and Reasi — all in the Jammu region.

The PAGD managed a good show in Pir Panchal and Chenab valley’s Kishtwar and Ramban districts besides its candidate from National Conference winning one seat each in Jammu and Samba districts.

The Congress polled a total of over 1.39 votes, while the Independents got 1.71 lakh votes.