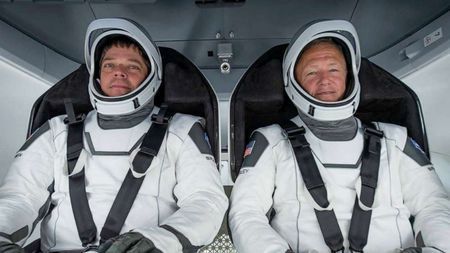 SpaceX’s astronaut on its rocket has set a record for the two heroes that flew the US NASA space station.

This is the first time the spacecraft has been able to fly into space on the rocket of the company. With this, a new era of space exploration is said to have been created.

The Falcon-9 rocket, designed by SpaceX, was launched on Saturday from the Kennedy launch in Cape Canaveral, Florida. The rocket was launched into the space shuttle, carrying two NASA heroes, Doug Hawley and Bob Bancken.

The two arrived at the International Space Station on Sunday with a spacecraft designed by Space-esk to take humans to space.

Subsequently, the duo were greeted by NASA space agency and Space-X from various quarters.

In 2011, the NASA Research Center abandoned its space shuttle program due to subsequent accidents.

Since then, the US has been using Russian Soyuz rockets to send astronauts to space exploration.

It is noteworthy that NASA has sent astronauts out of US soil for the first time in many years, joining hands with their country’s private company Space-X.