Fix No Sound Through HDMI In External Monitor In Ubuntu Linux 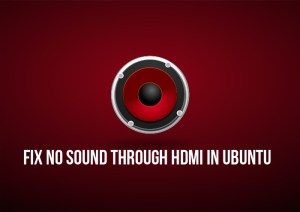 Fix No Sound Through HDMI In External Monitor In Ubuntu Linux

The other day, I connected my Acer Aspire R13 running Ubuntu 15.04 with my Samsung TV to watch a movie. To my surprise, there was no sound through HDMI in TV. The movie was displayed in the TV but the audio was still coming through laptop’s inbuilt speakers.

I have been in this situations in the past when HDMI audio not working in Ubuntu. This post was written more than two years ago when I faced similar situation with Ubuntu 12.04. But the previous time I could see HDMI option in the input audio source but in Ubuntu 15.04, HDMI audio option was not even listed in the input audio source so a switch to HDMI input was (seemingly) impossible.

For this reason, I decided to upgrade this article with new solutions so that you could fix no sound through HDMI problem in Ubuntu 12.04, 14.04 and 15.04. Though I did it for Ubuntu, I presume these solutions should also work for Linux Mint, elementary OS and other Linux distributions based on Ubuntu.

Fix no audio through HDMI in Ubuntu

I saw a number of forum posts with trouble on the audio problem in extended monitor in Ubuntu. Thankfully this problem was not complex, at least in this case with Ubuntu 12.04. The reason in my case was that the default sound setting was “built-in speaker audio”. Changing it to HDMI saved my day.

Open the sound setting. Type “sound” in Unity dash (by pressing the Super/Windows key) or from the top right corner choose the system settings and then look for sound setting.

In the sound settings, in Output tab the built-in-audio was set to Analog Stereo Duplex. Change the mode to HDMI output Stereo. Note that you must be connected to an external monitor through a HDMI cable to see HDMI output option.

When you change it to HDMI, a new icon for HDMI pops up in the left sidebar. Click on it and enjoy the sound of music.

This solution worked for me in Ubuntu 15.04. Unlike the previous solution, this time there was no option to change the output mode to Digital Stereo. I just saw the following screen in audio settings:

Interestingly, fixing it was even easier.

Connect your TV or external monitor through HDMI while you are using Ubuntu.

Open a terminal (Ctrl+Alt+T) and use the following command:

Now, open Sound Settings again (steps described in solution 1). You should see the option of HDMI in the Output tab:

Once you do this, from next time onwards, HDMi will automatically be detected when you plug in the cable. If you face issue again, just run that command again.

Even if the second solution did not work, try changing the configuration with PulseAudio Volume Control.

Open a terminal and use the following command to install PulseAudio Volume Control:

Under the Configuration tab, change the built in audio profile to HDMI:

This should fix the issue of sound through HDMI.